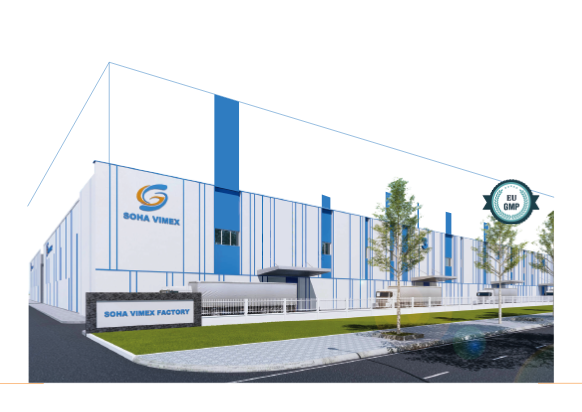 Soha Vimex factory was established in 2018 according to WHO GMP standards at N2 Road, Yen My II Industrial Park, Yen My town, Yen My district, Hung Yen province.
This is an area with a favorable geographical position: near the intersection of Hanoi – Hai Phong highway, adjacent to National Highway 39, 35km from Hanoi center and about Hai Phong port (the largest seaport in Vietnam). 75km, connecting with essential traffic routes to provinces in the North.

Soha Vimex was built with the purpose of being an EU GMP pharmaceutical factory to expand production scale. It is invested in production machinery and equipment to improve the quality of herbal products and bring the best products to consumers. The total area of ​​the factory is up to 40,000 m2, in which the construction area is up to 53% and the maximum allowable height for construction reaches 18m. The land use period extends until June 2065.

“The period of 2018 – 2019: Soha Vimex factory has been masterly planned and built modern infrastructure, featuring:

In the period of 2020 – 2025: Soha Vimex is going to build a pharmaceutical factory meeting EU-GMP standards with an investment capital of 30-50 million USD and an area of up to 5,000m2. Sohaco Group expects to build 2-3 production lines at Soha Vimex. We prioritize the selection of production lines that our partners have had a lot of experience and success with, such as:

In the period of 2025 – 2030: will deploy 1-2 more production workshops to meet EU-GMP standards with an investment of 30 million USD.

The Medisun factory was established in 2005 at 521 An Loi Street, Hoa Loi Ward, TCAT, Binh Duong Province. The factory area is up to 10,000m2 in Ben town, in which the construction area including 2 workshops:
– New medicines: tablets, film-coated, hard capsules, powder sachets, water, external use…
– Traditional medicine: tablets, film-coated, hard capsules, soft capsules
Medisun is the first pharmaceutical factory in Vietnam specializing in the production of soft capsules with a capacity of 500 million tablets per year, meeting the company’s long-term and sustainable development strategy.”